Kyric is the son of the legendary Aurific Zekric and a female human scientist. He was borned on Earth where he was he was raised by Zakray, a very close friend of his father. On Earth he encounter Ganryu, son of the legendary Feruga where they became best friends. He and Ganryu were prophesied to kill each other but they were not aware of the prophecy. They later encounter Simon the leader of Union, who was the one who killed their father to became the most dangerous man alive. After many trials set by Simon they finally overcome them and defeated him. But before Simon died he revealed the prophecy about causing them to become cautious to who they trust. Zakray then pursued all affairs of all anti-supernatural organization which lead him to capture Blaze the older half brother Ganryu. After Kyric alerted Ganryu that Shock Corps was about to kill his brother, Ganryu spring in action where Ganryu interfered with sentence which cause Kyric and him enter combat forcing the disintegration of their friendship. Kyric then grew up to become the new Lord of the Realm of Thunder but under dictatorship. He then left the Realm of Thunder to create his own realm and people. He was the first leader of the Realm of Sci, king of all Scians & Mutants and the number one enemy of the Lord of Spells. He and his former best friend the Lord of Spells started the next great war of the realms. After many battle between their realm, he then faced the Lord of Spells where he managed to defeat the Lord of Spells but fell into a coma. While in a coma, a secret organization (Liaison) and servants of Götterdämmerung started to induce chaos in the realm of sci under leadership of the corrupted Liaison Scian leader Vanric and Otoru the heraldic clone of Götterdämmerung and Utopia. After Vanric betrayed the infected Scians to personally kill Utopia in his dream, he was then confronted a reborned Utopia with his full powers and was defeated by him. Utopia then quit and gave Dactor Lergh full head of research, Slate the commander in chief and Professor Fota head of Phenom Control and left the Realm of Sci under the future of his son, Cyrak for good. He then build a small organization of Scians while on Earth but was recruited to join the supernatural council as a the representative for science along with the Lord of Magic.

Only when he combines with his alter-ego Götterdämmerung he can enter this form. Where he becomes a mutated symbiote bio-mechanical being that has power comparable to King of Cyberspace. 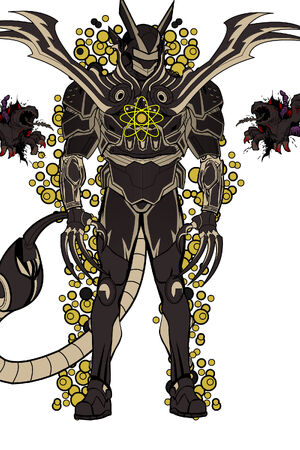 Retrieved from "https://heromainia.fandom.com/wiki/Utopia?oldid=13794"
Community content is available under CC-BY-SA unless otherwise noted.