The Sword Smith have a reputation for superior beauty and quality, remarkable power to its owner. The legend states that He who controls the blacksmith is considered to have brought to perfection and technically the strongest being alive.

The Sword made of...

Tungsten - is the strongest, heavy metal.

Titanium - is the strongest, light metal.

Blessed by the Angels

Special Swords for The Chosen 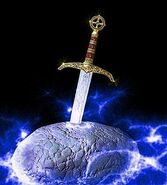 Sword of Heavens Lighting
Add a photo to this gallery

1. Enhanced Strength - Able to making them immensely stronger than normal members of their species (in that verse) can be achieve by any method of training.

2. Enhanced Condition - The Weilder of the sword becomes superior over their race because their capabilities are pushed to the superhuman level; making them immensely stronger, faster, durable and smarter than normal members of their species

3. Omniscience - The user is able to have the capacity to know everything that there is to be known.

4. Enhanced Wisdom - The user of this ability possesses great wisdom: deep understanding and realization of concepts, people, things, events or situations, resulting in the ability to apply perceptions, judgements and actions in keeping with this understanding.

5. Indomitable Will - The user has unnaturally strong willpower, enabling them to resist all forms of temptation including Subordination Manipulation, Telepathy, Mind Control and Subliminal Seduction.

6. Regenerative Healing Factor - The user can rapidly regenerate, in other words, they recreate lost or damaged tissues, organs and limbs, sometimes slowing, or even stopping, aging.

7. Powers Via Object - The user has access to an object that grants them supernatural powers, these can be magical objects of great or destructive power, or technological weaponry.

8. Support Enhancements - The user of this sword power can enhance a variety of physical abilities such as speed, strength, durability, accuracy, etc. The user can even apply more than one enhancement at the same time.

9. Peace Manipulation - User has the power to influence all forms of peace, including mental, physical, spiritual and conceptual ones, regardless of the area and numbers involved.

10. Chosen One - Users are special existences, blessed with exceptional good luck and nigh infinite potential. This luck and potential can manifest in virtually any way and form, but all users manifest the uncanny ability to overcome the most hopeless predicaments, defeat the most unbeatable opponents, and more generally achieve incredible feats that no one else could hope to pull.

11. Invulnerability - The user is immune to all forms of conventional physical damage, unable to feel physical pain, is immune to bleeding or loss of limb.

12. Zenith - Users of this sword power are able to obtain unparalleled might, becoming an unstoppable force. The user also gains access to the ultimate level of power that is capable of transcending the boundaries of their own species.

13 . Divine Combat - The user of this sword power is potentially the undisputed master of all forms of combat. Both natural and supernatural fighting skills are available as well as infinite strength and stamina. Users also have immense defensive abilities unsurpassed by any other fighter; they also posses a high level of intellect which they use to plan their attacks carefully.

14. Ultimate Invincibility - The weilder becomes invincible in many different ways and activities physically and mentally making its user supreme in one or several activities. Some users cannot be defeated by conventional ways and have no known weakness

15.Enhanced Swordsmanship - Users are able to demonstrate a natural aptitude for the ways of the sword. The user is able to wield a sword with great proficiency in speed, power, and skill, allowing them to perform feats such as stopping and deflecting bullets, decimate large objects or areas, cutting through hard materials such as steel, and even hold back their strength to deal damage to their foes without killing them.

The user is also able to operate with little or no effort, deliver skillful strikes to weak points with great precision. This ability also allows the users to become naturally skilled with multiple swords or any bladed weapon regardless of shape or size to suit their needs in combat.

Retrieved from "https://heromainia.fandom.com/wiki/Swordsmith?oldid=17372"
Community content is available under CC-BY-SA unless otherwise noted.