Rashi was created in the Immortal world from variety of different object the last ingredient was from the Rib of Zackariya itachi  A day later Zack put the ingredient together and was missing one last item and so in fleed to retrieve it until. This Ancient Witch named Rowan Diana marigold she has Finnish Deity Physiology and Celtic Deity Physiology  She added one ingredient an Egg of her own and mix it together and used her magic Necromancy to give him life and support as she gazed at her Creation she tend to called him her "Son" afterwards Zack returns with the item and it suprise him his creation is alive and it astonish him. They soon became best of friends and zack had a playmate.

During age 10, Rashi met a girl name Ashashree Phoenix acacius it was like love at first sight, but she was a  legendary bird and he was an average human being he says to her. Hi My name is Rashi looking with (nervousness) She says to him your not from around here are you, Nope We'll I want to welcome you to the mount olympus school for the Deity. He says to her Thank you and they walk over to the main doors and the most powerful teen god walk'ed out.

The toughest teen walk'ed out of the double doors, and say's Hey" squirt I heard one of our own created you,Then he shoves rashi to the ground face first in the grass your a Disgrace to our kind, She says "Asher, Asher" that is enough "Stop" sh e threw Asher off Rashi with her Enhanced Strength with her Phoenix Physiology she has been shown to lift up a boulder that she shouldn't be able to lift. Rashi feels  Migraine headaches which appear mentally inside Rashi head a voice that say's."Give into me", where are you?  Ashashree says Uh !  did you say something? "I thought I heard something"  , but never mind she says to him We'll ok look like you'll have to take it from here bye.

The more Rashi give into the voice inside of his consciousness the more abilite's he gains, And so he talk to Atlas the uncle to Zackariya he says Listen I've been hearing these strange voice's inside me, I dont know where they are coming from.Atlas states we'll try to figure it out see what the voices are trying to tell you" , Ok thanks, I will.

At age 15 he develope Enhanced Intelligence Zackariya was hardly ever around so he build a Robot  to be friends and wont leave him that day he final put  all the parts together and trying to figure this math (C)'=6t-96 bring that over 6t96=0 and t=96/6=96. Rashi turned on the switch and T39 look at him with a big smile and says "Master. he says That's right I am your master' .

The DoppleGanger is a alternate version of Rashi , after his accidently death  during zack grief he was trying to figure out as to who could  killed his creation Zack use his Resurrection ability to resurrect rashi back to life and now the Leviathan use his doppleganger power in able to switch souls with rashi and leave the good side in hell locked in Lucifer caged "screaming in pain". while the alternate version of him control his body.

Soul Absorption - absorb the souls of others. and Require the victims powers

Insanity Empowerment - The power to become stronger when someone, as well as yourself, is insane..

Illusion Awareness - The power to be be aware if one's surroundings are false.

Fourth Wall Awareness - The ability to be aware that one's Universe is false, and potentially use this to act in otherwise impossible ways within their false Universe..

Psychic Shield - The power to be  immune or highly resistant to all psychic penetration.

.Magic Immunity - The ability to be unaffected by Magic in any way.

'Selective Invulnerability - The ability to 'be naturally immune or invulnerable against a specific power or object.

Reflective Immutability - The ability to be immune to all alterations by transferring them to others.

Life-Force Absorption - The power to absorb the health and life of others and make it one’s own.

Dark Form -  undergo a transformation into a powerful, and more sinister form.

'Legendary Form - 'transform into the most powerful form in the universe and become the legend.

Demonic Force Manipulation - control everything that is unholy.

'Soul Absorption - 'absorb the souls of others. and Require the victims powers

'Soul Removal - 'remove souls from from oneself and others.

Possession - inhabit the body of an individual.

Doppelgänger Morphing -  take on the appearance of others one has seen.

Powered Form - cannot use any of their true powers unless they have transformed.

'Hate Empowerment - 'draw strength from one's own hatred or by the hatred of others.

Darkness Empowerment - be empowered in the dark or by darkness.

'Nether Manipulation - 'generate, conjure, and manipulate Nether, the essence that flows through the realms of the Living and the Dead.

'Death Force Manipulation - 'manipulate the essence of Death, which is present in all mortals throughout the universe.

Underworld Lordship -  hold dominion in the underworld, the subterranean Afterlife.

Destruction -  unmake and destroy anything, everything and everyone to total and utter nothingness.

Absolute Existence - control your own existence without any limit.

'Universal Irreversibility - 'render an action from oneself or others (including events in general) impossible to be blocked, manipulated and reversed, by all means.

Supernatural Beauty -  be supremely beautiful and use it to affect others.

Omnilock -  exist outside of everything.

'Perfection - 'to be perfect in all existing aspects.

'Absolute Intellect - 'possess a limitless level of intellectual and cognitive proficiency that can surpass anything in existence.

'Omnislayer - 'possess powers capable of killing any living being.

Blood of the Seal

The Blood is the most powerful magic there is and the only usally the Leviathan is highly immune to any but except this blood seal only the highest chosen one may learn this power magic seal its even more worth than The swordsmith. in order to get the effect going one must have a blood talisman when the effects are all together  one can choice two kill are strip the person that has the beast.

other Leviathans - leviathans can be killed bye eating each other. 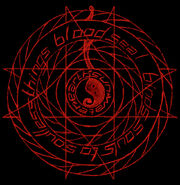 Blood seal spell
Add a photo to this gallery

Legend of the Doppleganger -   Legend has it that if you come face to face with your doppelganger, it's an omen or warning of death — for both you and your twin. Because of this, if you see a replica of yourself, run for your life. If you keep seeing your doppelganger, chances are that your days are numbered, because you'll soon see your demise.There are many stories regarding encounters with doppelgangers, none of them pleasant. Often, a person does not actually see their own doppelganger, but someone else does. Can you be two places at once? No, but it's a very strange feeling when someone who knows you very well insists that they saw you just thirty minutes ago — and you were nowhere in the vicinity. Imagine this happening time and time again and you'll soon go insane. Hence, the myth that a doppelganger will precede the arrival of the real person. Many stories explaining their experiences with these apparitions have this in common. Perhaps he's one step ahead of you?

Add a photo to this gallery
Retrieved from "https://heromainia.fandom.com/wiki/Rashi_Aakar_Yuzuki?oldid=17445"
Community content is available under CC-BY-SA unless otherwise noted.