Before he had became the Lord of Spells he was named Ganryu the son of the legendary Feruga the Destroyer. He was borned on Earth where he was he was raised by in the Institute of Pyroniacs by Master Teronius, his father's mentor. On Earth he encounter Kyric, son of the legendary Zekric where they became best friends. He and Kyric were prophesied to kill each other but they were not aware of the prophecy. They later encounter Simon the leader of Union, who was the one who killed their father to became the most dangerous man alive. After many trials set by Simon they finally overcome them and defeated him. But before Simon died he revealed the prophecy about causing them to become cautious to who they trust. After Zakray captured Blaze his older half brother. He was alerted by Kyric Ganryu that Shock Corps was about to kill his brother, He then spring in action where he interfered with sentence which cause him and Kyric enter combat forcing the disintegration of their friendship. Ganryu then grew up to become the new Emperor of the Realm of Fire but left the Realm of Thunder because he said they were too weak to create his own realm and people. He was the first lord of magic of the Realm of Magic, king of all Magi & demon and the number one enemy of the Kyric. He had to change his name because it was cursed. He and his former best friend the Kyric started the next great war of the realms. After many battles between the Realm of Sci, he faced the Scyrant (Utopia) in battle where he was defeated by being imprisoned in the Void. After many years in the Void, Sapphire a undermined member of the 13 Order rose up and became the new Lord of magic and sever all ties to the King of Hell which resulted in a civil war and a war against demons. At the very last minute of the final confrontation the Members of the 13 order sap all their power free the Lord of Spells, Lockray and Teronius to defeat magic resistance and the demon gorge. The Lord of Spells defeated his father Feryuga which ended all wars in the Realm of Magic. He then fully retired as a Lord of Magic leaving Sapphire as the Lord of Magic and trainer of his Alderzac the future Lord of Magic.

This is form where he merges with his demonic soul. In this form, his magical abilities are increased surpassing any demon and sorcerer combined matching his power to the King of Hell. 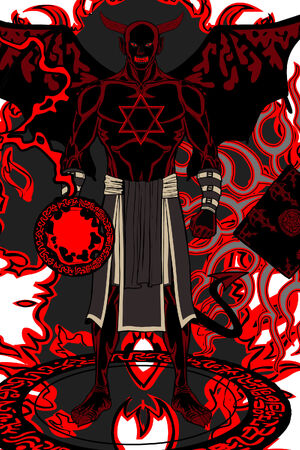 Retrieved from "https://heromainia.fandom.com/wiki/Lord_of_Spells?oldid=13646"
Community content is available under CC-BY-SA unless otherwise noted.